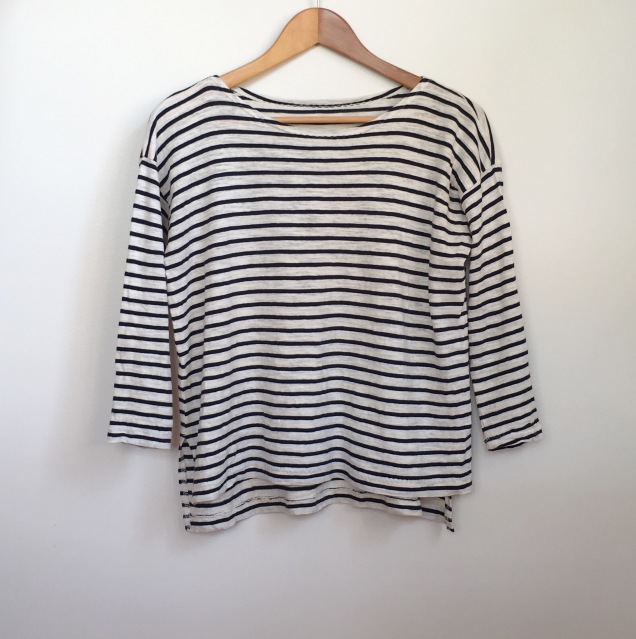 If, like 99% of the sewing community you listen to the fantastic love to sew podcast, you’ve probably heard Caroline mention her favourite pattern, the Mandy boat tee.  It’s a free pattern by Tessuti patterns which has been around for a while but was never really on my radar until I started listening to the podcast. It was originally available as a PDF one size download but last year Tessuti graded it into several sizes and released it as a paper pattern.

Now I definitely prefer a paper pattern so even though it was still available as a free download the next time I was in Melbourne I made a beeline to Tessuti to pick up a copy. While there they also happened to have some lovely striped jersey which was begging to be made into Mandy boat tees. Now I don’t know about you guys but good striped knit fabric is really hard to find! So when I run into some that I like I tend to snap it up. 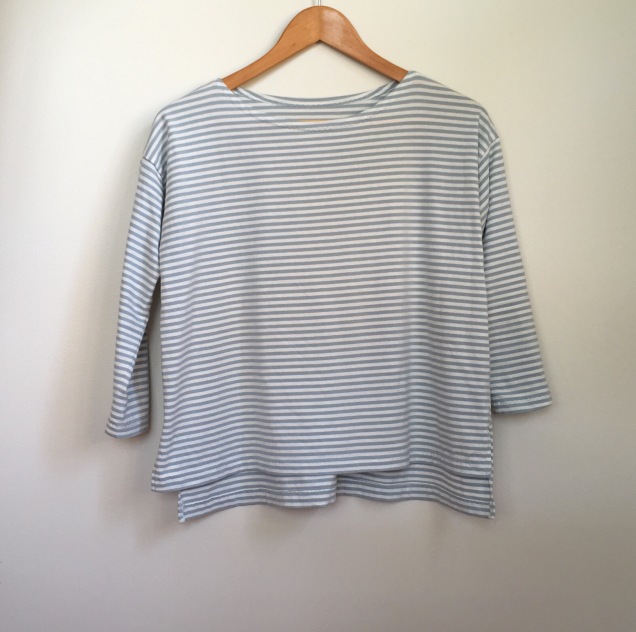 It was rather obvious what my sewing plans were as the lovely sales assistant commented “two Mandys?” when I put my two bolts of jersey and pattern on the cutting table. These were both super wide fabrics (from memory close to 2m wide) so I only bought 1m of each to make a size XXS. 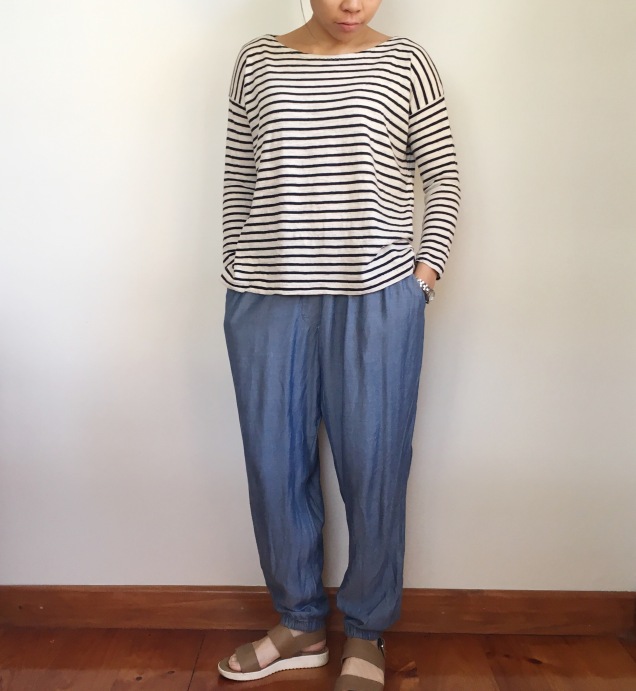 Instead of sewing a straight hemline I cropped two inches from the front piece and did a side seam slit. For reference I’m only 150cm tall so this would probably be too short for most people. I cut the fabric flat (not on the fold) with my rotary cutter as I attempted to do some stripe matching for the first time. I pinned every stripe but still found some shifting when I sewed the tops up on my overlocker. I probably should have basted with the walking foot on my sewing machine first then overlocked but I was in too much of a hurry to get these finished (there’s always next time at least!) 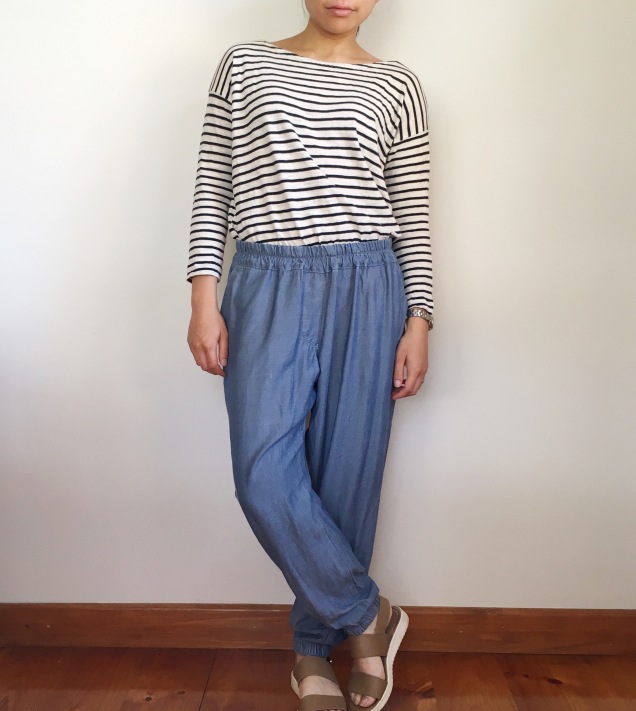 The pattern suggests using a double needle to finish the neckline and hems however I find I tend to get a tunneling effect with a double needle. I have heard of using wondertape to help combat this however didn’t have any so just used a triple zigzag instead. To be honest I quite like the look of a zig zag and nearly always use it to finish hems on knit garments. 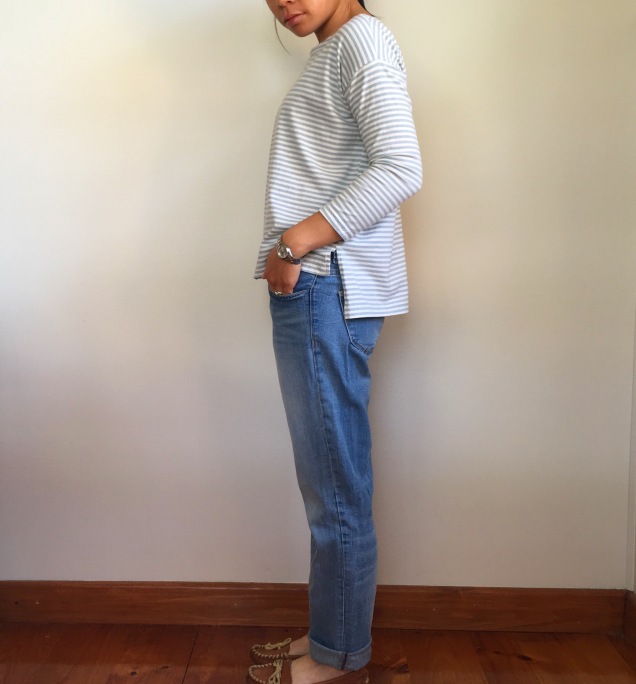 I finished these late last year and both these tops have been in constant rotation since. They’re the perfect mix of comfort with a touch of style and have been equally good for lounging around the house or popping out to do some errands on a casual day. The main question with these tops is to tuck or not to tuck? 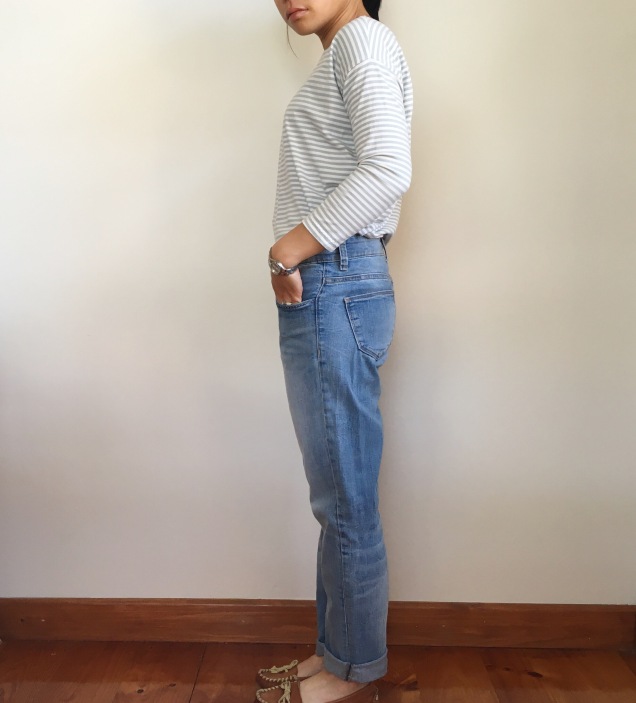 A few things to note: the drape of your fabric will affect the fit of the finished garment. My black and white striped Mandy is a thinner fabric with more drape which I prefer over my blue and white Mandy which is a heavier weight knit. I would probably stabilize the shoulder seams and neckline with some interfacing or clear elastic (even though it hasn’t been an issue so far).  I would also consider making the neckline opening slightly narrower as my bra straps have a tendency to show near the edges of the neckline.

All in all the Mandy boat tee is a quick and satisfying pattern and while I don’t think I’ll ever have as many as Caroline, I would definitely recommend it! Happy sewing xx

One thought on “A Tale of two Mandys”